For whatever reason, I never developed any particular interest in video games, with one exception: Lego Rock Raiders. Around 2000 or so, I received a copy for my birthday, and spent the next ~10 or so years trying to beat it before I finally did in college. (I’m really bad). It was originally intended for Windows 98, a simpler time, when the developers felt the need to present a scary-looking message on installation to alert you that installing it would take up 150 MB of disk space.

Over the years, whenever I got a bit of nostalgia and decided to break it out again, it made the journey to successively newer versions of Windows. Alas, with the arrival of Windows 10, I was no longer able to get it to run. Since I had nothing better to do, I decided to try to get it running under Wine, and amazingly enough succeeded. Should you too be interested in resurrecting this ancient game, I’ve documented the steps below.

Chances are you may already have it installed, but if not, download and install it first.

This is Apple’s distribution of X11. Although Wine is now able to run without it, I found it a bit more graphically glitchy that way. You’ll want the latest version, which as of this writing is 2.7.9 rc2.

Install Wine and its dependencies

I’m not sure if this is strictly necessary, but according to the comments on the Wine compatibility page it is. Run the following commands in Terminal: winetricks amstream winetricks quartz winetricks devenum.

I ran into issues getting the game to run fullscreen, and considering it was designed for a 640x480 resolution, it’s going to look ridiculous anyway. Instead, you want to run it windowed. Run wineconfig, and check the Emulate a virtual desktop box under the Graphics tab. Set Desktop size to, you guessed it, 640x480.

Use the X11 driver

Wine has recently come out with very nice integration with OS X’s native window manager. Unfortunately, it ignores the aforementioned virtual desktop setting, so we need to override it to use the X11 driver instead. To do this, run regedit, then expand HKEY_CURRENT_USER > Software > Wine and select Drivers. In the right pane, right click and choose New > String Value. Enter graphics in the Name column and x11 in the Data column. The end result should look like this: 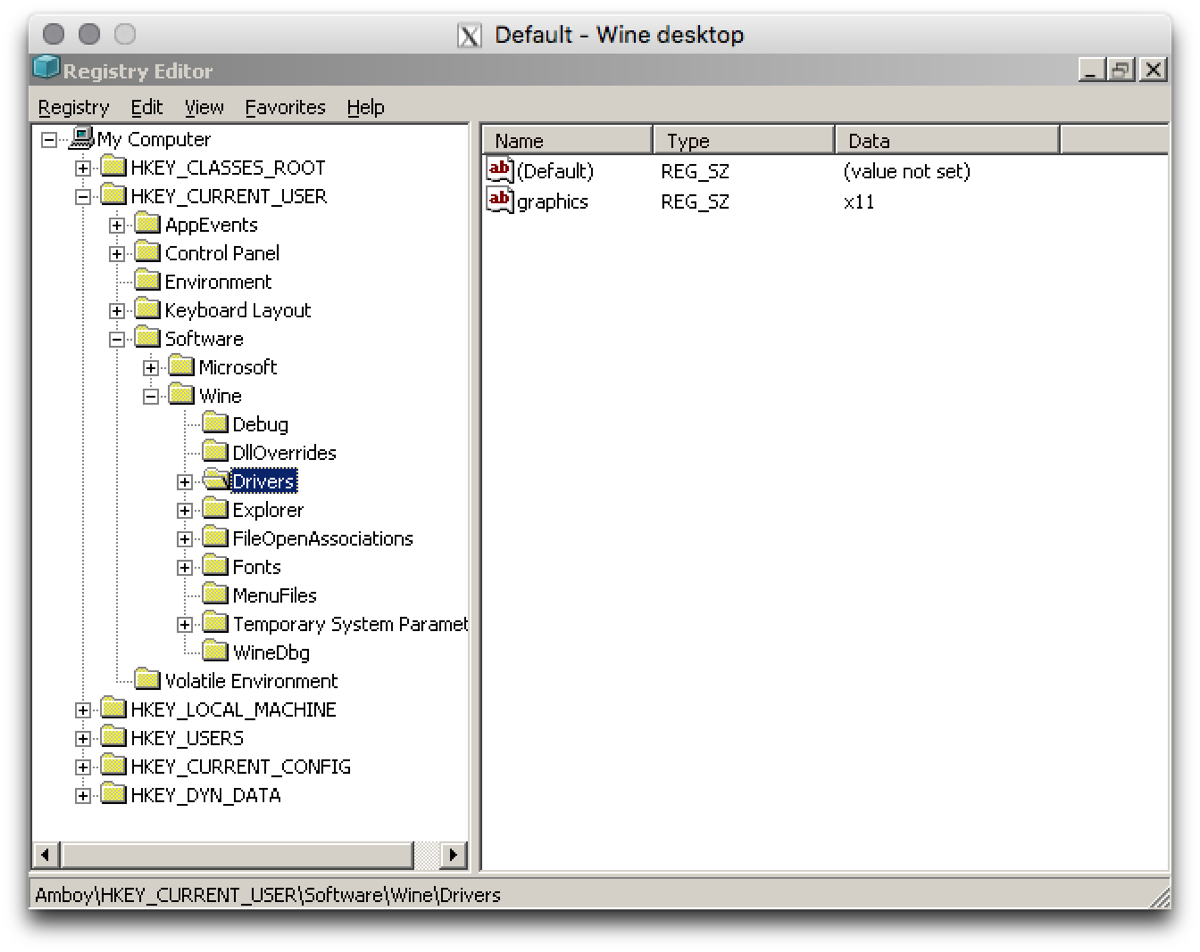 At this point, the Wine environment is pretty much set up. The next step is to actually install the game, which you can do by inserting the CD and running wine /Volumes/ROCKRAIDERS/Setup.exe and running through the setup assistant. If it prompts you to install DirectX, decline - it doesn’t work. Instead, once the game is done installing, copy /Volumes/ROCKRAIDERS/DirectX6/DirectX6/Directx/D3DRM.DLL into the game’s installation directory.

Even on Windows, these required some obscure codec to play. Your best bet is to simply remove them, since they’ll crash the game. Launch Finder, choose Go > Go to Folder… in the menu bar, and enter in ~/.wine/drive_c/Program Files/LEGO Media/Games/Rock Raiders/Data/AVI. Rename or remove the .avi files in that directory.

Work around the CD requirement

My version of the game requires that the CD be present to run, and Wine fails to do whatever it’s expecting for this to work. If the same is true for you, you’ll need to scour the seedy corners of the internet for a workaround, and hope that Wine isn’t good enough to reliably run Windows viruses on OS X 💁.

If you’ve made it this far, with any luck you should be able to run the game. cd into its install directory, and run wine LegoRR.exe. You’ll need to select the Direct3D HEL (RGB Direct3D emulation) option, then click OK. Behold: 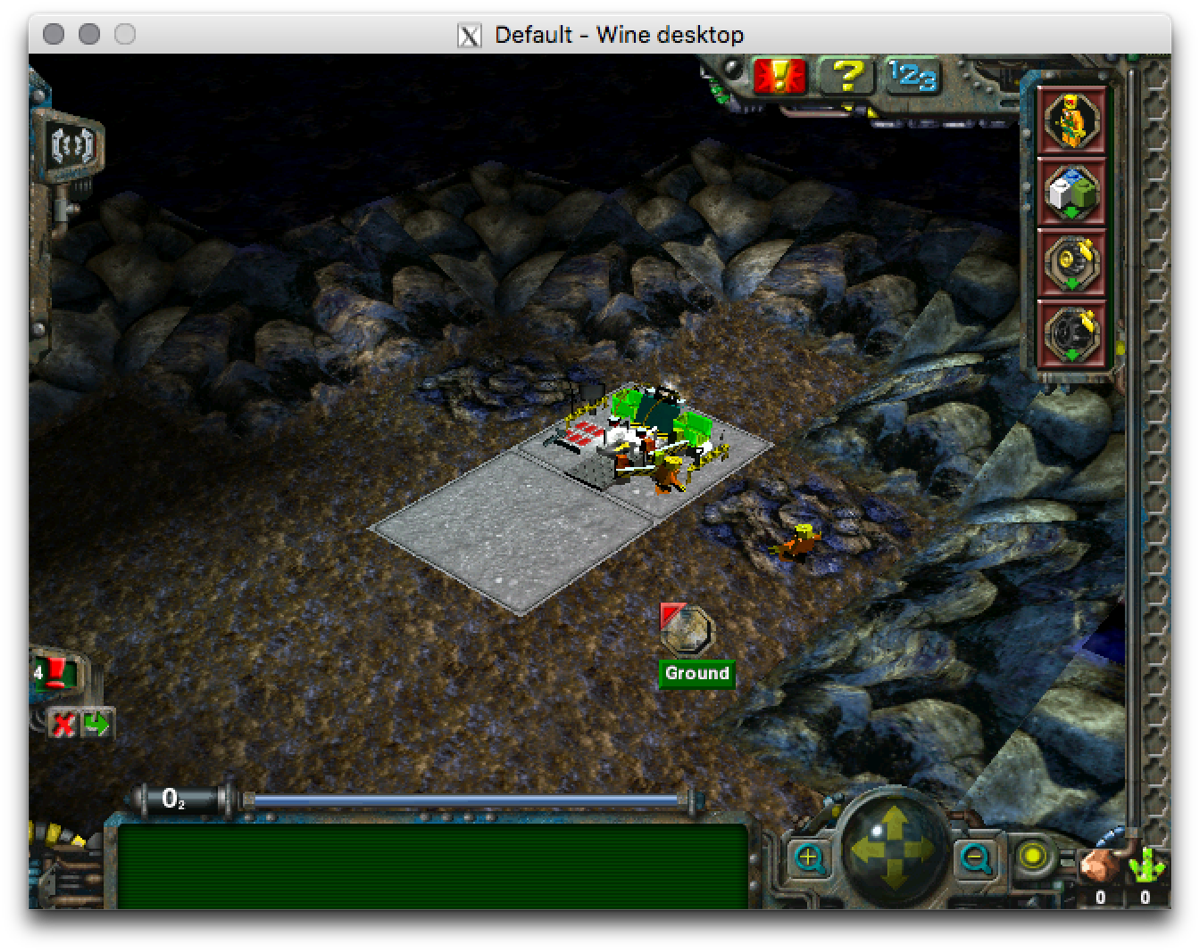