First, some background: I drive a 2004 Saturn Ion. It’s overall a quite satisfactory vehicle, but the one thing that drove me crazy was its options for music playback. Being a 2004 model, it’s recent enough to have not come with a tape deck, but also old enough to have come right before the rise in popularity of the iPod, and consequently had no aux jack either. Instead, it had only a CD player and a radio. To its credit, the CD player was capable of playing back MP3 CDs, but having to burn discs, swap them in and out, and listen to the same tracks in the same order quickly became very old indeed. The lack of a tape deck also prevented the use of those tape deck adaptors, and I’ve always found the FM transmitter dongles to be pretty crappy.

Given this state of affairs, I was intrigued to notice that my Nexus 7 appeared to be almost exactly the same size as the stereo system. This quickly gave me the idea to see if I couldn’t enhance my music experience and snazzy up my car in the process, and so I set out to dash-mount my Nexus 7.

The first step was confirming that my hunch was right, and that the Nexus would indeed fit perfectly behind the dash molding. A bit of searching showed that firmly tugging on the AC vents allows you to remove the molding, and with some trepidation I attempted it. If you’ve ever had to open an old-style Mac mini, it’s a lot like that - it seems like you’re using far too much force and going to horribly break it, but it’s sturdier than you think and pops right off with sufficient pulling. On my car, it remains attached via the cable from the emergency flashers button, but otherwise comes off cleanly, and sure enough, the Nexus was a perfect fit.

As luck would have it, one of my coworkers was a former car audio installer, so we met up one Saturday with the goal of getting it all set up. Our first stop was Best Buy, to get a wiring harness and a radio. I had assumed that the radio connected to the car’s wiring with maybe two wires, so a simple splitter would be sufficient, but it turns out this is not how cars work. Instead, there’s a wiring harness, which is essentially a DIY adaptor that plugs into the car and has a bunch of wires you solder onto the radio on the other end. This works fine, but it necessitates that you still have a radio, which I thought would be somewhat problematic, seeing as the whole point was to remove the radio and mount the Nexus in its place.

Fortunately, like every other electronic device, car radios have gotten smaller since 2004. I found the cheapest radio in the store, the Alpine UTE–42BT, and purchased it and the appropriate wiring harness. Not only was this radio half the height of the stock radio, it was also noticeably less deep. This allowed it to simply be stuffed in behind the tablet in the space formerly occupied by the OEM radio. It also has several convenient features: it turns back on automatically when the car starts, retains its input and volume settings, and has a USB port on the front.

With the audio portion complete, our second stop was Home Depot to pick up something to hack together a mounting bracket with. We wound up going with a few pieces of hard foam board and some velcro strips. I cut the foam board to fit, and stuffed it in atop the radio to brace the tablet and prevent it from being pushed back, then applied the velcro strip to it and the top of the tablet in order to hold it in place and stop it from sliding around. 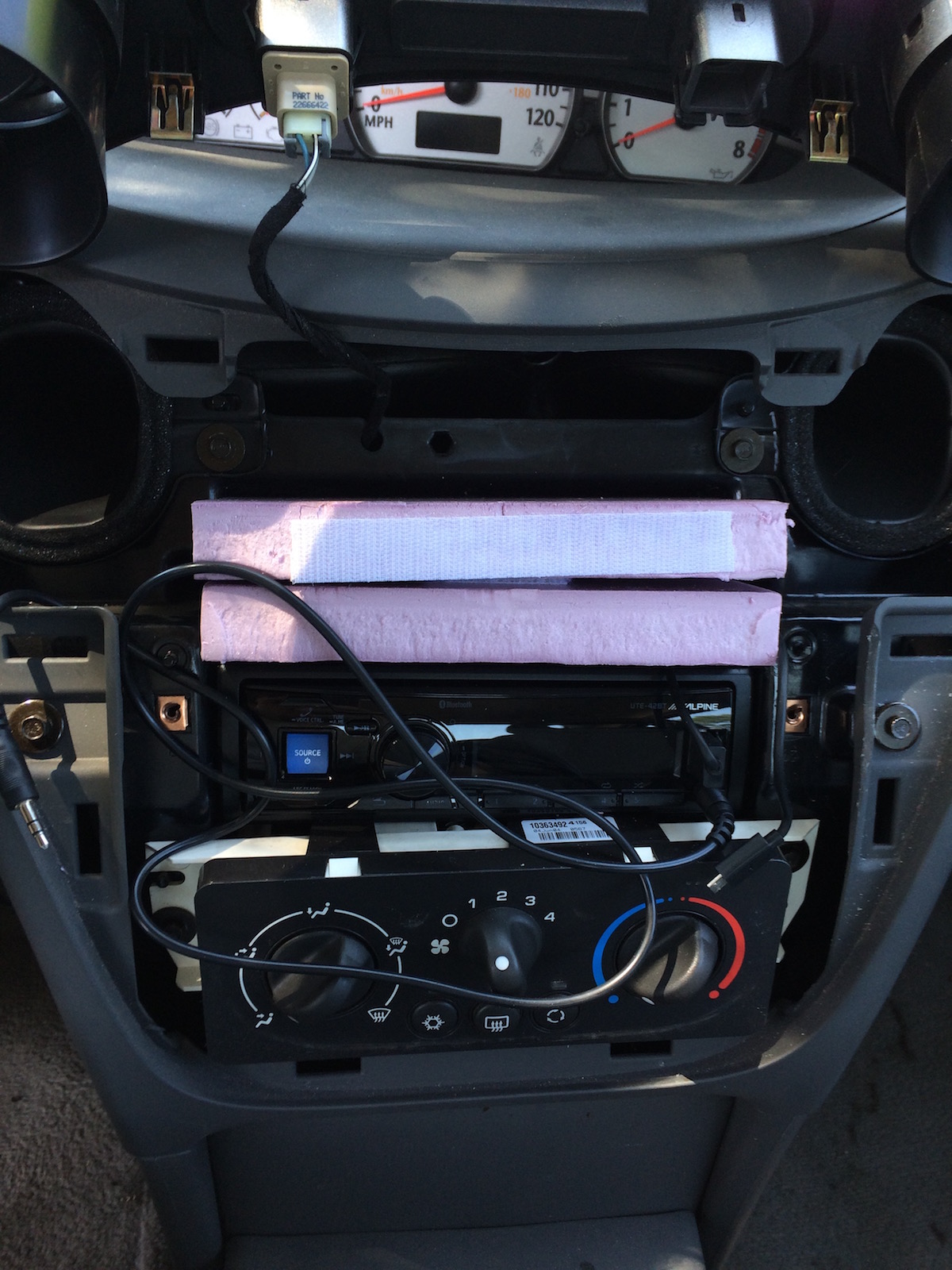 The only thing left to do was to file out a bit of the plastic behind the dash in order to allow the USB cable to fit and connect the Nexus to the radio. I connected an aux cable between the Nexus and radio on the other side, and it was all good to go once the dash molding was snapped back in place. 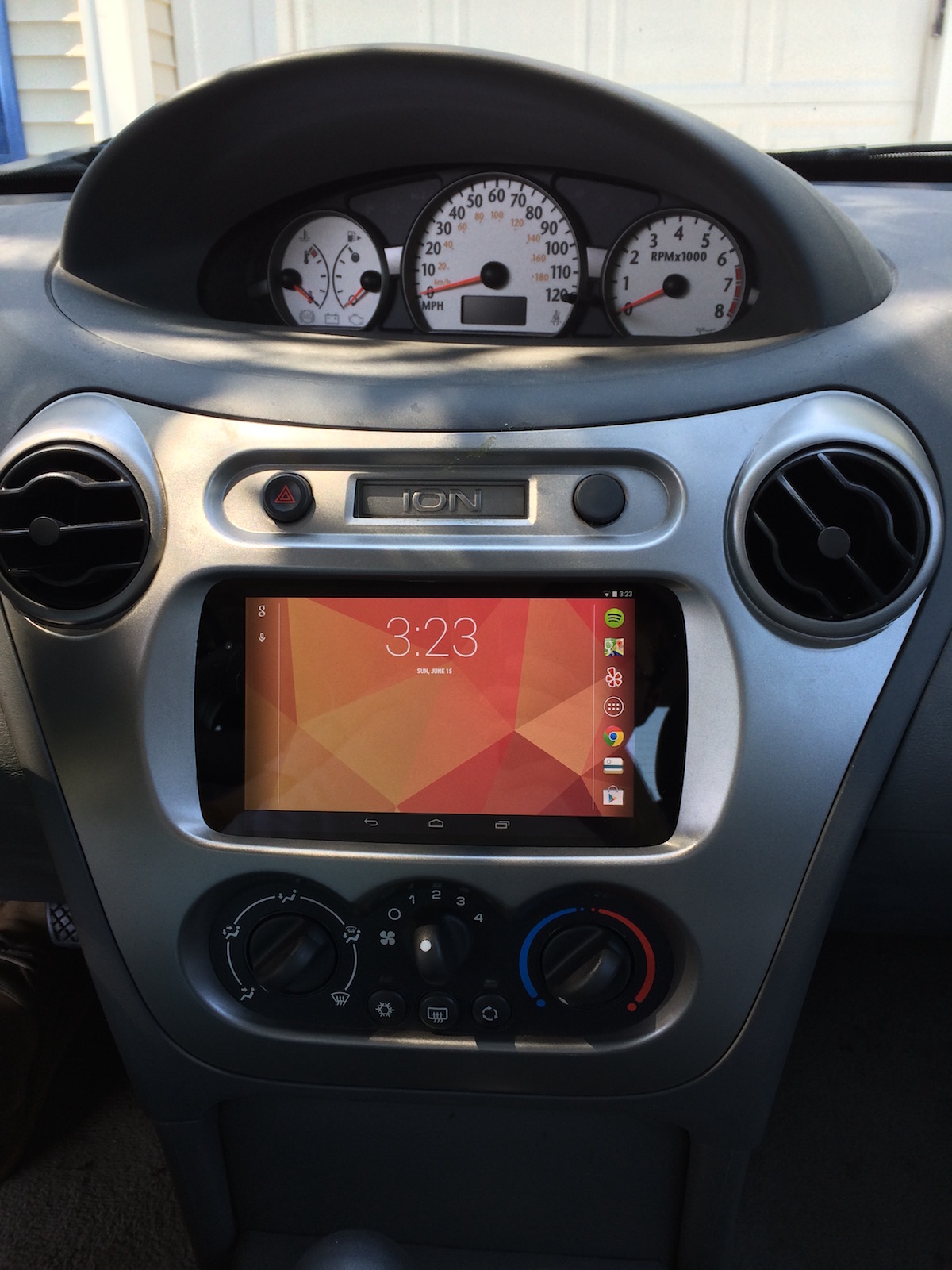 Once the Nexus 7 was in place, I took some time to configure the software side of things. In no particular order, here are some of the tweaks I made to make it work as well as possible:

On the whole, I’m super happy with how the whole thing turned out. It looks fantastic, and is nearly impossible to tell it didn’t come with the car. That being said, battery life is a slight issue. The tablet only charges when the car is on, and this is normally enough to keep its charge fairly constant. However, heavy use of navigation (especially with the map being displayed) can knock it back faster than it can charge, and leaving Wifi/Bluetooth/LTE on when the car is off will also accelerate battery drain. This is easily remedied by toggling airplane mode, and since I only occasionally need navigation anyway, that hasn’t been a big deal either.

The only other issue I’ve run into is that sometimes touching the main screen (rather than the on-screen buttons at the bottom) will cause the screen to lock. This would be a big problem, since it would require removing the dash molding to hit the power button to unlock it, were it not for a convenient trick. The Nexus 7 has a magnetic sensor used to automatically lock/unlock it when certain cases are opened and closed, but it can also be triggered by simply holding a magnet up to the corner of the tablet, which will then unlock it. I keep a large magnet in the cupholder for the odd occasion once or twice a month when this happens, and it works fine.

If you’re considering a similar project, go for it. It was fun and easy to do, and is so nice that it would be a serious impediment to considering getting a new car for me. For the life of me, I can’t understand why car manufacturers roll their own craptacular in-dash systems. Every one I’ve ever seen has a trainwreck of a UI, is slow and buggy, in some cases actively user-hostile (specifically disabling features while the vehicle is in motion, which took me 30 minutes to discover while I tried and failed to set up Bluetooth playback in my parents’ car – from the passenger seat). In contrast, the Nexus 7 just works. I can use any app on the Play Store, skip songs in Spotify (via a convenient swipe, with no need to look at the screen), get regular updates, have spoken navigation automatically fade out and fade in my music, pair it with my Android Wear watch to get notifications and have a quick glance at upcoming directions, and it all works fantastically. And best of all, I’m no longer stuck with just CDs and the radio!